Today, I was reminded about a song I posted the lyrics to back in August:

Today was one of my first days out of the house in almost a week. I will not go into disgusting or humiliating details but I had a bacterial infection under my arm and the pain grew immensely. Starting last Friday, I began to have a pain under my arm. I stayed close to home most of the weekend. Monday and Tuesday I was in bed most of the day other than a trip to the doctor. Wednesday morning I went to Cuesta Arena and ran some errands around the city but when I came home I was miserable.  Friday morning I had to go to Cuesta Arena for a meeting with the parents. I was there maybe an hour and came home. Apparently it was written all over my face how miserable I was because many people checked to see how I was doing. When I came home, I began looking at flights home. I was not sure how I was going to fly while in such pain but I all I could think was I wanted to be home. I was frustrated, tired, and scared. Sairy was in Santo Domingo for a mandatory meeting of all the pastors and the only reason I did not purchase the plane ticket home was because I wanted to talk with Sairy first. Luckily, before Sairy came home Friday night, things started looking up.  I once talked to a missionary from Haiti who had contracted cholera. She said it was the scariest time but once threw it and on the other side, she felt like an official missionary. Many of the church members this morning welcomed me to official Dominican status. Apparently, the bacterial infection that I “contracted” is very common here. The only difference being that I was able to afford the $10 a pill for 5 days in order to get well quicker. Many people live with the infection for months and have up to seven infected sites. I was not sure that I wanted to blog about this awful experience. I was scared, ashamed, and embarrassed but I am sharing it now because of what was happening while I was stuck in bed. “People need to understand, what God is speaking when He is silent. He is silent because He is working. Simply wait for what God is going to do…” 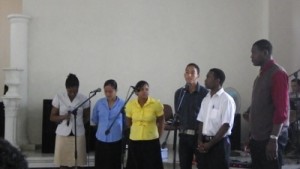 This morning when we arrived at church, we walked in to find Wendy! Wendy is an active member of the church, leads the children’s ministry at church on Sundays as well as Saturdays in Los Cocos. She sings in the praise team on Sundays and is just an all around amazing woman. Unfortunately,  a couple of weeks ago she went into the hospital, and took a turn for the worst. With the most amazing faith, her family prayed and came together. The church surrounded her and lifted her up along with numerous missionaries from across the US. Now just weeks later, Wendy was at church and sang in the praise team. Gloria a Dios! 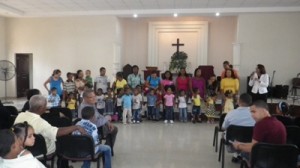 In church today, we also had arranged for all the children in the school and their parents to come into church this morning. We knew they were coming but nothing could have prepared me for the moment that 19 children and their parents, along with other community members walked into the door for worship. They had to rent 2 15 passenger vans, packed Dominican style to get to church. At the start of Renewed Hope in Cuesta Arena we desired to have a bus run every Sunday morning. For various reasons, we were never able to continue the ministry, until this morning. It was amazing to see the children and their families and to worship with them on Sunday morning. Kendy and Daisy took the child upstairs so the parents could give full attention to the sermon. 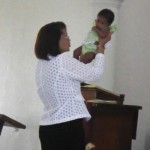 As part of the service, Johnny, one of Guillermo’s brothers dedicated his two children. He has a son that is one year old and a baby girl that is three months old. It was amazing to see not only Johnny and his family but many more of Herman’s children at worship. Johnny is now living back in Cuesta Arena with his new wife and their 4 children (two step children). He is working, built a house just before Christian’s house and is wanting to dedicate his children to God. 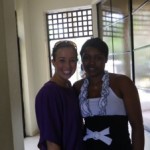 Today showed me how great God really is. Just like in the song, when I felt like He was silent, it was simply because He was working.Wendy was healed enough to attend church, 19 children and their families in worship, Johnny’s children dedicated, and Hermania present. I know this was a God was showing me He was working. The reason we work in Cuesta Arena is due to the faith of one man, Herman. He has been faithful to the church and dedicated many years to live at the church and care for the property. He does not have much but everything he does have he will offer it up. Herman had 8 children, Fransisco, Turibio, Domingo, Johnny, Guillermo, Maria, Hermania, and two others who do not live in Cuesta Arena. After today, all 6 of the 8 children who live in Cuesta Arena have attended worship. Before the work in Cuesta Arena began, not a single child of Herman attended worship! God has been working slowly in the lives of the people in Cuesta Arena. The school has made a significant impact in the lives of not just the people who have children in the school. It has given the community hope for the future and they are beginning to grow spiritually.