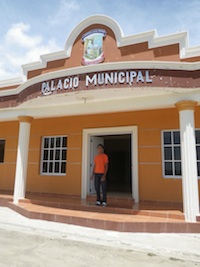 This morning I met with Guillermo in Cuesta Arena. Guillermo’s brother Francisco (for those missionaries that know Cuesta Arena- the blue house by the water project with the outhouse we always used) married Carmen and had one son, Francisco Javier aka Javier, Javiecito, Frank, and many other names depending on who you talk to. Javier is finishing his 8th grade year. The family chose to pay the extra money in transportation for Javier to go to school in Batey 1. They told me if he went to school in Los Almacios he would never learn how to read or write. Though they are not supposed to, both the schools in Los Almacios and Batey 1 take children without their birth certificates due to the large number of the population without them. The only high school in the area is in La Canela (even further than Batey 1- about a 20 minute drive). In order to enroll in the high school it is mandatory to have your birth certificate. Javier, like so many children in Cuesta Arena, does not have his papers. About a year ago, we worked for a year to get Herman’s children (Guillermo, Francisco, Turibio, Hermania, etc) their birth certificates. This means that Javier’s father, Francisco has his documents, however, law states that a child can only acquire their documents through their mother. Javier’s mother, Carmen, does not have her documents. We learned of this recently and began encouraging her to work toward getting them so that Javier can continue in school.

Originally, Carmen told us that everyone in her family had their documents except for her because she was not present when they all got theirs together. Next we learned that she did have documents but they were in another name and not Carmen. At the end of the day, we learned she had documentation of baptism (which is a legal document but doesn’t have a lot of weight). Through talking with members of her family we learned we had to start at the place of her birth. We had to travel to a small community in the mountains, get some sort of documentation from there, then go to another place to continue with the documentation.

After we did everything to get Herman’s 8 children their documents, we decided it was impossible to achieve this for every member of the Cuesta Arena community. It is a long process and at the end of the day, we did everything for them. We have decided to provide help in areas where poverty makes it impossible to succeed but that members of the community needed to drive the processes. In other words, we would help where we could but they had to be the force behind it.

Today, we traveled to Carmen’s place of birth. Sometimes it is a good thing that I have no idea where I am going before (and sometimes after ) I get there. Today was no different. I told Carmen, for Javier’s sake, I would be chofer. Knowing their financial position, I told them if they figured out where we needed to go and what needed to be done I would get them there. Today Guillermo, Javier, and I left Cuesta Arena a little before 9am. We drove up toward Hato del Yaque to pick up a friend of Carmen’s family. I was told this gentleman knew everything about getting papers as he had helped the family and other people get their documents. Since I had no idea where I was going, not much changed for me, but when he got in the car, we found out the place we needed to go was not 30 minutes away but 2 hours away. We decided to continue on as we didn’t have much time before Javier needed his papers before school started. 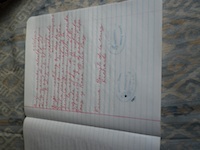 As we drove, we talked with Javier about why all three of us (myself, Guillermo, and this gentleman) were taking hours out of our day to complete these papers. We talked with him about the importance of school and how it was up to him to finish, no excuses. We drove for about an hour before the road no longer was paved. We traveled through the mountains and across very small bridges. We made a couple u-turns as there are no signs and our directions were simply, “turn at the next house”. Out of no where, the told me to stop at what seemed to be nothing but a small foot trail down the side of the mountain. We got down to a cluster of houses and asked for a guy. Like true Dominican culture they offered us chairs (even though we had been seated for 2 hours due to our journey). We waited for the guy to finish with whoever he was with before explaining to him why we had traveled so far. As best I can understand, this guy is assigned by the “government” to give authority that Carmen was born in this community. Because the guy’s eye site is not very good, Guillermo wrote out the entire document, including signing the guy’s name, on a piece of notebook paper (that was later ripped out of the notebook and cut nicely with scissors). The guy made the document “official” by spitting on the dried out ink pad and stamping a stamp on the paper.

We then had to hurry to the next location, as we arrived finished at about 11:00am and all places close at 12 for lunch (until 2pm). We arrived at the next place at 11:30am and they were able to complete the next document in the process. If we had not made it before 12, we would have had to return another day to complete the document. At 12 as the rest of the country breaked for lunch, we started our trek back to Cuesta Arena. Once I dropped off the gentleman at his house and Guillermo and Javier in Cuesta Arena, I returned back to Santiago for lunch (returning here about 1:30pm). Though we had a very successful day, we have only begun the process of Carmen getting her papers together in order to begin the process all over again with Javier. As I said earlier, I feel like it is our responsibility to help them break through the barrier poverty puts on them. There is absolutely no way, this family could ever afford to complete this process. It is an impossible, lengthy, and many times frustrating process just to have the ability to go to school. Every case is different. Much like in the states, it depends on where you are born and what you have to start with. As I have been through this process in the states with many homeless people, it is still easier in the states because much is still online. Imagine having to drive to New York to get your birth certificate because you now live in Florida and you can not get work, rent a place to live, or even get government assistance because you do not have your birth certificate. Without your birth certificate you can not get your social security card, or your id card. How is it their fault that they are still living below poverty? Show me a system that makes it possible for them to help themselves?