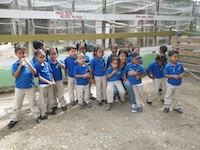 Wednesday, May 22 we took the kids to the zoo. The kids were super excited for days before we left. Every time I went to visit they all told me how they were going to the “zoologico” or the zoo. Unlike zoos in the states, the children could get very close to…even touch the animals, like the lions, monkeys, ostriches. Kendys spent the week before instructing the children how they could not stick their fingers in the fence, they had to stay with the teacher, etc. On Wednesday morning, the children were ready!! 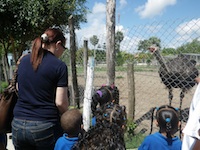 All of the children arrived early to school and nearly all the parents were there as well. Since the zoo didn’t open until 10am, the children had time to do their morning circle time to go over the date, the weather, sing songs, pray, and go over the rules one last time. Poor little Kiuni just could not understand why we were not loaded up in the van and headed to the zoo by 8:02am. For every question Kendys had, Kiuni’s answer was “Quiero ir al zoologico” (I want to go to the zoo). What day of the week is it? “The day to go to the zoo.” During role call…Kiuni? “Quiero ir al zoologico!!” She was desperate! 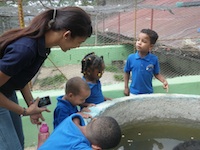 At 9am we loaded up the van to head to the zoo. When we arrived, the children sat in the picnic area for their snack time before heading out to see the animals. First was the lions, then turtles, ducks, geese, alligators, buffalo, ostriches, horses, various breeds of monkeys, lots chickens and roasters, iguanas, boa constrictors, puppies, pigs, cats, raccoons, parrots, every kind of bird, and fish.   The children loved every minute of it except poor little Miguel, who was terrified. Any time we had to walk close to the animals due to the small walking paths he freaked out. I tried to convince him that they weren’t leaving their cages and it was safe but he would have none of that. I finally got him to calm down by showing him the ducks playing in their pond. After that, any time he got scared he w

as scream I just want to see the ducks!  After the first 30 minutes Miguel eventually calmed down and about 15 minutes after that was able to walk with the other children but kept very close to the adults. For the most part, the children all did very well staying close, not sticking their fingers in the fence, and following directions.

It was a great memory for the children (and adults). We took the 4 parents that have been the most responsible in keeping up with their duties in the school (cleaning, paying, and coming to church once a month). The children all paid their entrance fee and the rest was covered by what was made at the used clothing store the day before.

Tuesday will be the last day of school for the children. The graduates will continue for a couple days to work on their graduation ceremony. Graduation will be a huge celebration June 8 in Cuesta Arena. The parents are planning and providing the food to follow the ceremony. It is incredible to think about what has happened this school year! It is hard for me to think about the fall and the school starting without me. I desire to know every child’s name in the school along with their siblings, their parents, where they live, and their life stories, however in August I must head back to the states and look for a job. It will be difficult but proud to know that the school will continue on without me!